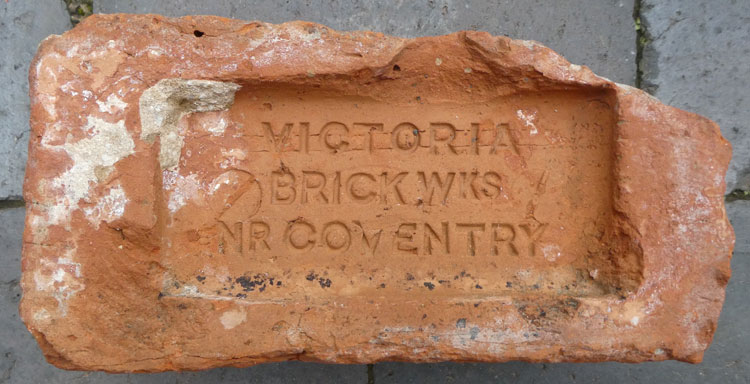 A brick from the Victoria works, Longford

The second of the Coventry brickyards to receive the ‘One brick: several stories’ treatment is the Victoria Brickworks, Longford, Coventry. The brickworks were situated in Grange Lane, Longford, not far from Victoria Farm, from which it presumably gained its name. Information on the brickworks is sparse but the challenge of piecing together odd snippets from a variety of sources produced some interesting results.

Marked on the 1888 OS map, the brickworks were clearly operational in the last quarter of the 19th. century, but ownership has been difficult to establish. An advert from the Coventry Evening Telegraph for 27th. June 1904 helped in this respect.

So the brickworks pre-1905 was worked by an A.A.Wincott. The name obviously attracted my interest – an unusual name which should be easy to trace through Census and newspaper records. So it proved – the A.A. was Arthur Augustus – and he emerged as an important Coventry businessman taking on several civic responsibilities as well.

Arthur Augustus Wincott was born in Harbury in1854, but moved to Coventry, with 133 Foleshill Road given as his residential address from (at least) 1881. He was certainly in business as a builder and contractor on the Foleshill Road, and on his retirement in 1916 mention is made of his 40 years in business, so he must have begun at some stage in the 1870s.

He only seems to advertise in the local newspapers from the 1890s and the following appeared regularly in the Midland Daily Telegraph of 1891.

The best ‘view’ of the brickworks is achieved via the OS map of 1902-4 on the National Library of Scotland’s Maps facility maps.nls.uk which shows two pits, brickyard buildings, and a tramway linked to the Coventry Canal at Coney Lane Bridge. 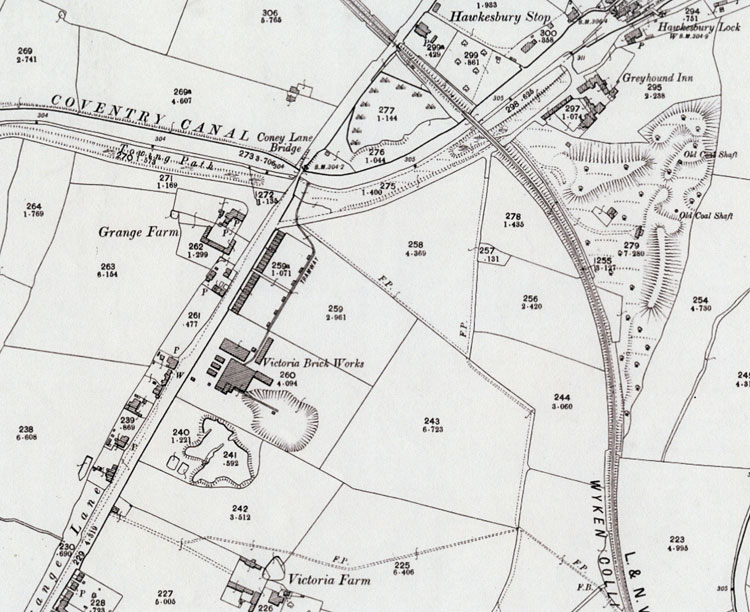 The other piece of helpful information is a series of adverts 1905-6 where the site is up for sale, with those sale details revealing much about the size and facilities of the site It has clearly been improved in readiness for the sale. The following is from The Coventry Herald of August 4th. 1905

The above Brick Plant having been put in thorough working order, two of the kilns re-modelled, drying stove re-constructed, kilns deep drained, a NEW GRINDING MILL put in by Joseph Hamblett, West Bromwich, comprising larger and additional crushing and finishing rolls, a large 8ft 0in mixing pan and ploughs, 2 additional pugs, and other improvements is NOW OFFERED FOR SALE BY PRIVATE TREATY.

A very high quality seam of best clay has been opened out and worked in the lower seams of marl and the new mill has been put in of sufficient grinding, pugging, and mixing efficiency to treat it. The clay has been proved to a thickness of 20 to 23ft. and is till deepening and improving.

An acre or two of frontage land might be sold off or utilised for building lots without interfering with the productive capacity of the brickworks and as such buildings would be in close proximity to Wyken and Exhall Collieries and New Gasworks, also adjoining Victoria Colliery, they would form a good investment.

The Common Bricks have been tested by Messrs. Kirkaldy and Sons and are of sufficient strength
for all Engineering purposes.

There are NO RENTS OR ROYALTIES of any kind and convenient terms of payment can be arranged.

Apply by letter only Proprietor, Victoria Brickworks, Longford, near Coventry.

Responsibility for the sale was taken up by LOVEITTS in the Midland Daily Telegraph of 13th.October 1905, additionally emphasising the advantages of the site in terms of nearby transport links.

‘THE VALUABLE FREEHOLD PROPERTY known as “VICTORIA BRICKWORKS”
containing twelve and a half acres or thereabouts, situate in Grange Lane, Longford,
having a WHARF ON THE COVENTRY CANAL, only about half a mile from
Hawkesbury Lane station, and within a short distance of the
Main Road and Tram route from Coventry to Bedworth.’

The Victoria Brickworks were again advertised in 1906, this time including mention of the capacity of the works to produce 3,000,000 best and Common Bricks. It was then announced that the Lot involving the brickworks had been withdrawn.

What exactly happened subsequent to this is not clear, but the brickwork buildings had gone by the 1920s, although the pits were still marked on maps. There is clearly still much to be learnt about the Victoria Brickworks, Longford.

Any remnants of the Site of the Victoria Brickworks have now been obliterated by the building of the M6 Motorway, which crosses Grange Lane at the site of the old works.

As well as his business activity Arthur Wincott began to become involved in civic responsibilities, being elected to the Board of Guardians in 1893. In one of the obituaries his role in the Board was assessed

“Mr. Wincott was not a frequent speaker at the Board Meetings, and when he spoke he usually did so in quiet, restrained tones. He was always listened to with respect and the esteem in which he was held was manifested by his fellow Guardians twice choosing him as Chairman”.

He went on to serve on the City Council, where his ‘professional knowledge, applied to civic affairs, enabling him to accomplish much useful work on the General Works, Fire Brigade and waterworks Committees. He was also a keen churchman, serving as churchwarden at Holy Trinity, Coventry. 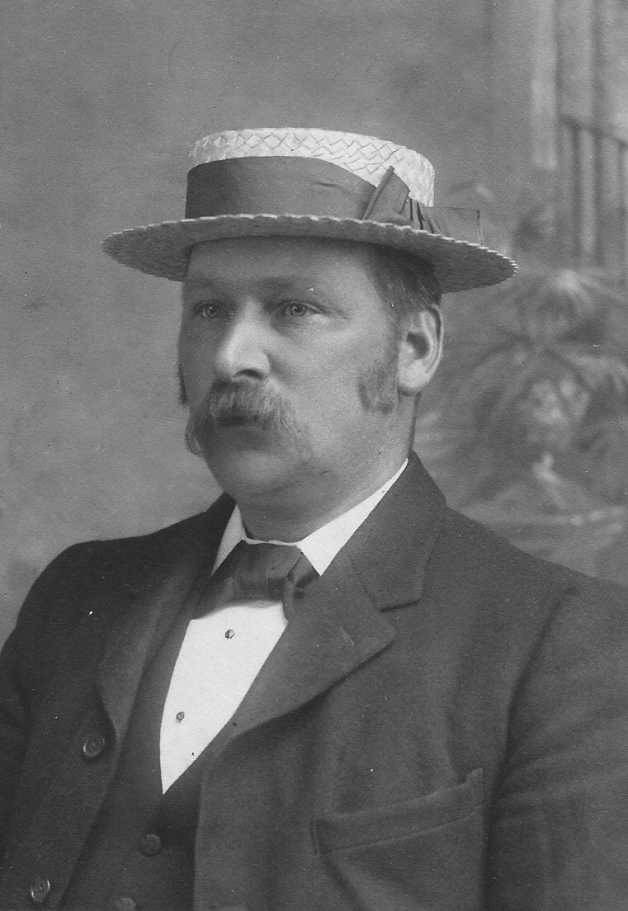 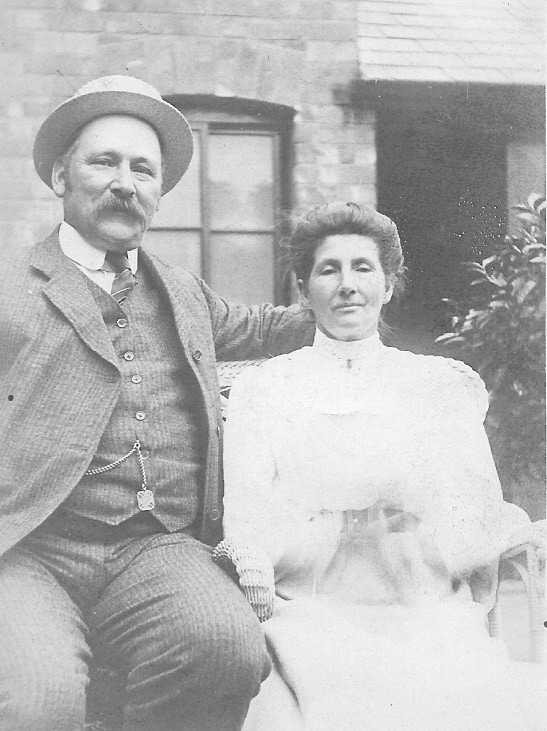 Arthur with his wife, Ann 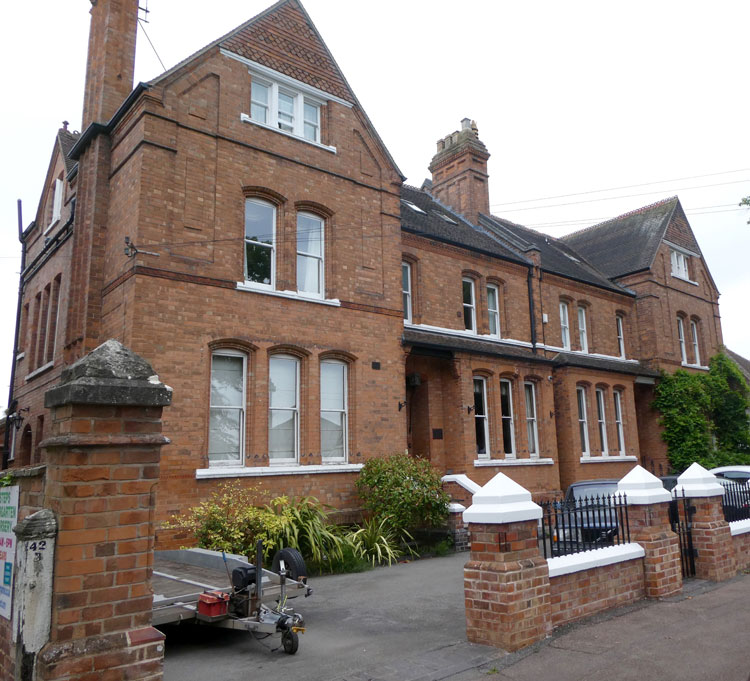 He retired in 1916 and went to live at Lorne House, Arlington Avenue, Leamington Spa, the left-hand half of a generously-proportioned red-brick property. He died at the house in 1927.

A note on the Victoria Colliery

The Victoria Colliery was also in the same area as the Victoria Brickworks, as illustrated on the 1902-4 map. The colliery lay behind the familiar Greyhound pub and row of cottages, thought to be associated with the colliery. The Wyken Colliery railway line (from the LNWR Line at Hawkesbury Lane) was also linked to the Colliery. Victoria Colliery was permanently closed in 1870 after a series of fires underground. 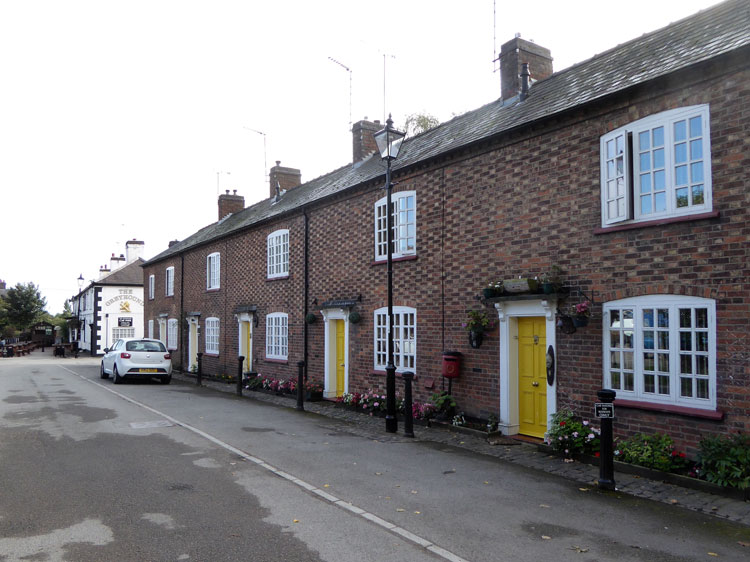 Miners’ cottages at Hawkesbury Junction, with The Greyhound pub beyond

Also in Grange Lane is the birthplace of Thomas Mann, renowned champion of workers’ rights. Mann began his working life in the Victoria Colliery, and it is hard to imagine the experience of nineteenth century industrial Longford as the M6 thunders by overhead. 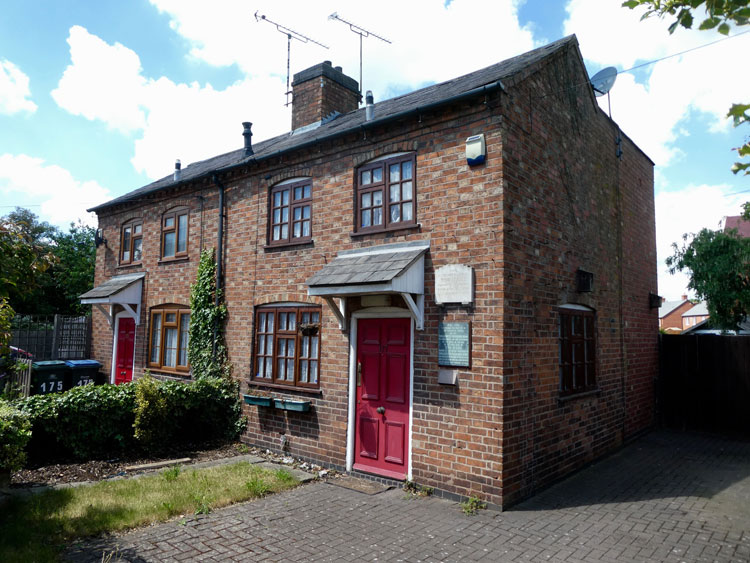 After a short spell helping out at the colliery farm, the young Tom Mann was put to work in the Victoria Colliery. He described the experience in his Memoirs…

“My work was to take the ‘mullock’, coal or dirt that the miner would require from him … For this removal there were boxes … about two feet six inches long and eighteen inches wide and of a similar depth, with an iron ring strongly fixed at each end. I had to draw the box along, not on rails; it was built sledge-like and each by had a belt and chain … Crawling on all fours, I would drag the box along and take to the ‘gob’ where it would be emptied. Many a time did I actually lie down groaning as a consequence of the heavy strain on the loins, especially when the road was wet and ‘clayey’ causing much resistance in the load being dragged.” 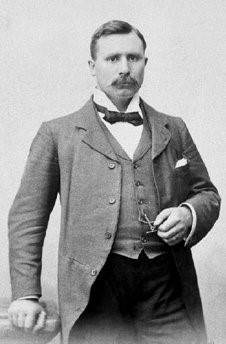 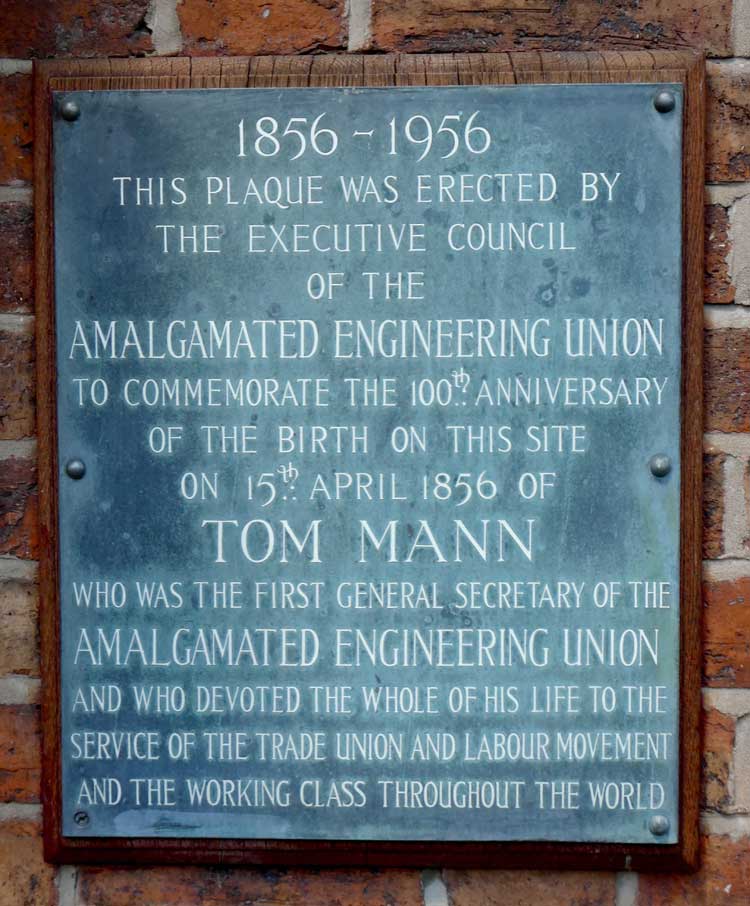 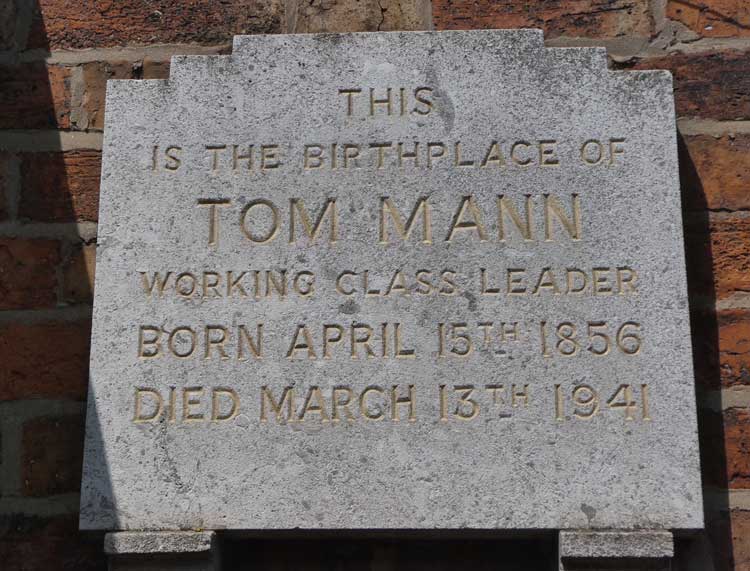 These experiences must have had a powerful influence on his attitudes to working life and the need to protect the interests and welfare of the working man.