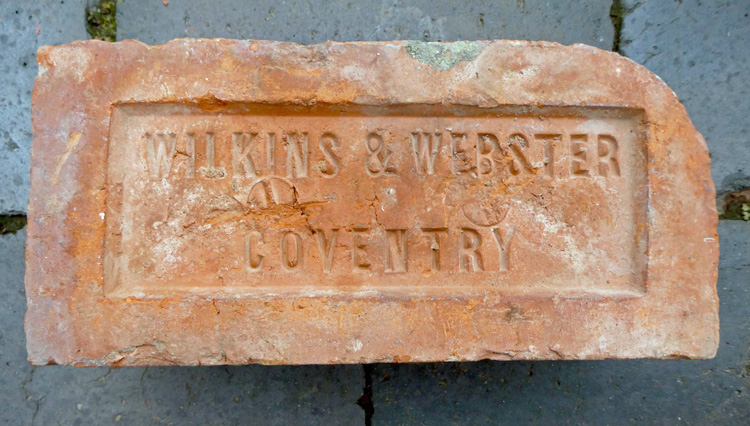 The firm with the strongest brickmaking presence in the city is that of Wilkins/Websters/Hemming Brickworks on the Stoney Stanton Road. In fact the company went through a number of ownership changes, and the detail of all this is a potential topic for further research. Suffice it to say that the company was the last brick producer in the city and – fortunately – a photographic record of their final years is available. The site of the works is currently (2020) being re-developed, with part allocated to public space as Webster’s Park.

There were a number of brickyards and brickmakers in the city of Coventry in the nineteenth century (and almost certainly earlier).  Wilf Hopley in his survey of Coventry brickmaking suggested the following:

In 1750, seven brickfields existed in the south of Primrose Hill in one area known as Spitalmoor, now built on and occupied by Paynes Lane, Days Lane, East Street and Canterbury Street. Most of the bricks used in the extensive construction programme when the Hillfields and Chapelfields districts were built came from these brickyards. William Day worked in Days Lane, J. Priestly at Priestly’s Bridge, the latter yard being subsequently owned by J.Snow.  Snow supplied the bricks for the building of the steam flour mill in Cox Street, and took part in the banquet at the top of the chimney for the opening ceremony! In 1854, he also supplied the bricks to build the Britannia Street  area.  In a series of ownership changes, J.Snow became Wilkins and Snow, then Wilkins and Son, and in 1888 Wilkins and Webster.

The Wilkins family plays an important part in the history of Coventry brickmaking and building trades. There are several members of this family all involved in the building trade, and it is not always clear about which strand of the family a particular advert or reference may apply. Another difficulty is that a number of locations are mentioned, in part, presumably, because there could easily be a brick making facility separate from a builders’ yard. This is something that I have been working at for several ‘lockdown days’ with no great success, but I felt the time had come to post what I had discovered thus far. Perhaps others can help me out?

As far as I can discover, Thomas Wilkins (1800-1881), born in Brinklow, became a builder living on the Foleshill Road. He is listed as bricklayer in the 1841 census, living at Paradise Row (now Eden Street), Foleshill, with his wife Catherine and their four children, Elizabeth (20), Joseph (18), a bricklayer, Benjamin (14), and ?Ebenezer (10). Both Thomas’s sons entered the Coventry building trade, one with a greater long-term presence than the other.

Eldest son Joseph joined his father in business, as recorded in the 1851 Census. Thomas employed ten men by this stage, and business seemed relatively brisk

FIRST RATE FREEHOLD PROPERTY
TO BE SOLD BY PRIVATE CONTRACT

The property is well-situated in a respectable and improving neighbourhood,
fences itself in on three sides, is substantially built, respectably fitted-up, and let to
good Tenants at a yearly rental of £66.10s.

To persons desirous of purchasing a substantial new Property, or Persons living in the
Country desirous of investing in town property, this is an opportunity seldom offered.

Similarly, the same paper published this advert on 25th. November 1853:

The houses are well built, pleasantly situated in a respectable neighbourhood;
let to good Tenants at a moderate Rental, and will be sold in lots to suit the convenience of Purchasers

Further change came in 1856 when The Coventry Standard announced:

have taken premises in St. Nicholas Street opposite the Canal Wharf Gates,
Coventry, where they intend to carry on their business.

St. Nicholas Street is also listed as the residence of the Wilkins family in the Census of 1861, working as a builder, employing 6 men and 2 boys. 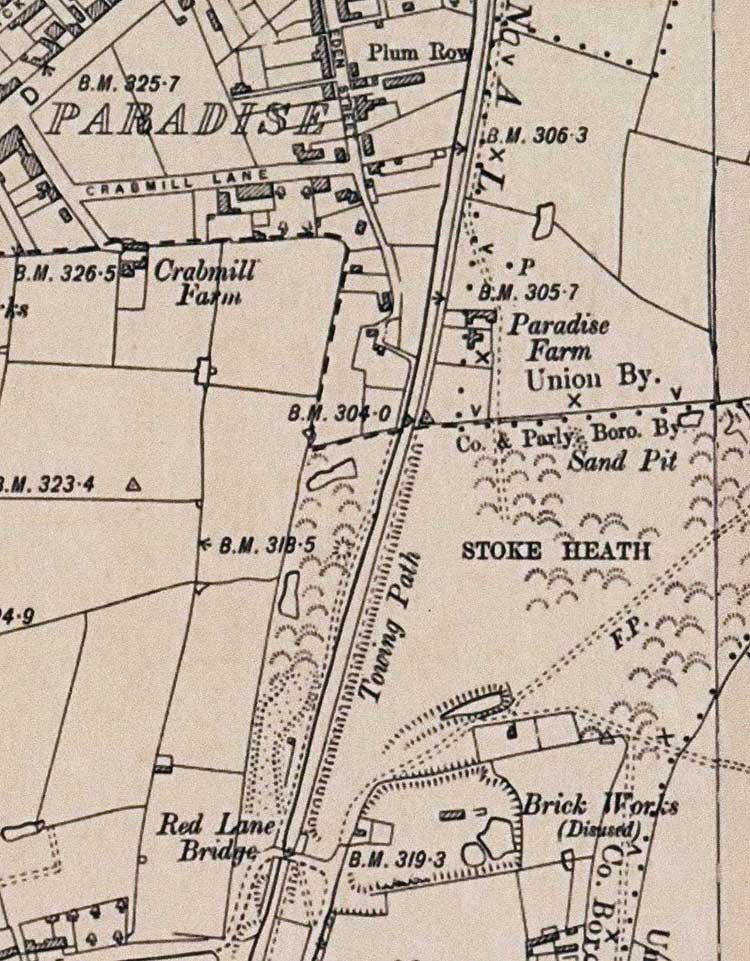 A later 1904 map showing Eden Street (home of the Wilkins family for a period); the (by then disused) brickworks to the east of the canal near Red Lane bridge; and the juxtaposition of Paradise and Stoke Heath.

In fact three locations seem to have been occupied by Wilkins  – Paradise/Stoke Heath; Edgewick; and Bishop Street/St. Nicholas Street near the canal basin.

Then in 1857 came the announcement of a four-day sale of the stock and plant of the Wilkins business. It is difficult to tell whether this was a desire for re-organisation, or whether the business had over-stretched itself and fallen on hard times. One suspects the latter.

The sale by Thomas Clarke ‘on the premises BISHOP STREET, COVENTRY and at PARADISE and EDGEWICK, in the Parish of FOLESHILL’ revealed what a sizeable concern the Wilkins business was, together with confirmation that they were very much builders as well as brickmakers.

THOMAS CLARKE Is instructed TO SELL BY AUCTION

ALSO TO BE DISPOSED OF WITH IMMEDIATE POSSESSION

The BRICK YARD, with kiln and sheds, at Edgewick, in the Parish of FOLESHILL

A later (Coventry Herald 21 July 1860) advert has the Edgewick brickyard up for sale again:

A SUPERIOR RED BRICKYARD TO BE DISPOSED OF,

To Persons desiring to enter the Brick Trade this is a first rate opportunity,
as the Clay is suitable for Moulded Bricks of every class,
and for which there is a continuous demand.
There is a large drying shed properly heated by Flues, and a Storing Shed,
so that 10,00 bricks per week can be made the year round.
The Moulds, Presses, Mill and Plant are complete and of the best kind,
with Cottage for Overlooker in the field.

Precisely where the Edgewick brickworks was located is yet to be confirmed. A kiln is shown behind Edgewick street on the 1888 map, but no evidence is yet available to confirm whether this was the ‘Edgewick brickyard’ in the adverts.

These successive auctions indicated that the Wilkins business was probably struggling, and the Birmingham Bankruptcy Court of 1860 included the listing of ‘Thomas Wilkins and Joseph Wilkins, Coventry, builders’.

The St. Nicholas Street premises seem to survive this, but it is announced in the Coventry Times that on 18th March 1862 the auction of the remaining building materials would take place, coupled with the news that “Joseph Wilkins was leaving England”. The premises are soon taken over by Amos & Boon, Wheelwrights and Smiths.

What emerges is that – whether as the onset of religious conviction, or as a means of escaping the troubled trade conditions in Coventry in the early 1860s – he is persuaded to join the Non-conformist exodus to New Zealand.

The Albertland Special Settlement Association was set up in Birmingham in 1861. It was led by William Rawson Brame, and those potential migrants who were persuaded to join became the ‘Albertlanders’, members of New Zealand’s third and last organised religious settlement, following the Anglicans to Christchurch in Canterbury and the Presbyterians to Dunedin in Otago. Named after Victoria’s recently deceased husband, Prince Albert, the emigrants included workers from the Midlands textile industry – Nottinghamshire, Derbyshire, Leicestershire and Warwickshire – who had fallen on hard times in the early 1860s.

Two of the first vessels to make this journey were the Hanover and the Matilda Wattenbach, leaving London in the summer of 1862. The Wilkins family of seven was aboard the Hanover. She arrived in Waitemata Harbour, Auckland, on September 17th. 1862 with over 300 passengers on board, a journey of more than 100 days.

We are fortunate that the Watsons, fellow passenger of the Wilkins family, kept some ephemera from the journey – for example, a Passenger’s Contract Ticket and a Ticket for the Farewell Tea Party in the Grosvenor Rooms. 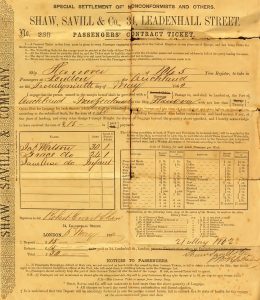 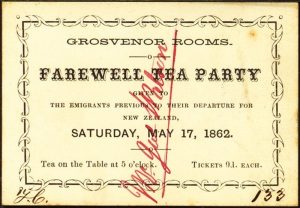 Ticket for the Farewell Tea Party in the Grosvenor Rooms 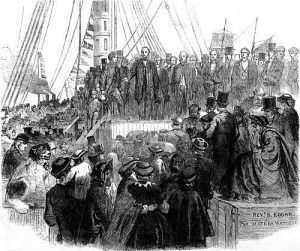 The departure of the Matilda Wattenbach

The other piece of good fortune is that Joseph Wilkins decided to write back to the Coventry Times to relate his experiences. The first of his letters is published on 28th. January 1863:

Since our last publication, we have received from the General Post-Office a salt-water stained and travel-worn letter … This piece of unexpected fortune enables us  to present our readers with an account of the “voyage out”, and no doubt we shall, from time to time, receive other communications fro the writer of the epistle given beneath. Although details are very circumstantial, we have thought it best, as Emigration is now such a popular topic in this locality, to give the letter in its entirety, in order that all the incidents which Mr. Wilkins has narrated may be borne in mind, and the advice tendered duly considered.

In a telling juxtaposition in the paper the adjacent article is entitled ‘DISTRESS IN NORTH WARWICKSHIRE’ and relates the troubled times in the ribbon trades. It is a fascinating but harrowing account, but emphasises how emigration might be seen as a favourable alternative.

Joseph Wilkins sent a series of letters, containing lots of interesting information about the experience, but the principal message was to encourage potential migrants to think very hard before making the journey.

The experience of the Albertlanders has been the subject of considerable research, often presented with the photograph of this group, with the printing press taken to New Zealand and used for the production of the ‘Albertland Gazette’ –  the first edition actually printed on the Matilda. I can find out nothing about the almost alien presence of the an extremely tall gentleman on the left of the photograph in the centre below! 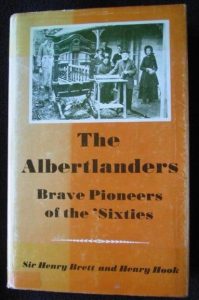 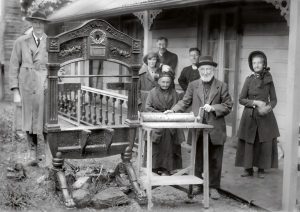 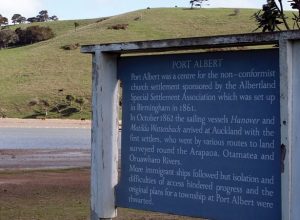 Despite the great fanfare surrounding the departures of the Hanover and Matilda Wattenbach, little came of the grand scheme for the settlement of Port Albert. The intended destinations were along the Arapoa, Otamatea and Oruawhano rivers, but isolation and harsh conditions hampered the establishment of any sort of real community, despite grants of land (plots) from the Auckland Provincial Government. Wilkins related some of the bleaker experiences of some of the settlers.

The letters from Joseph Wilkins are a fascinating collection and deserve careful consideration, well beyond the confines of this short piece. They contain many comparisons with Coventry, and he records his dismay at the difficult conditions the city seemed to be enduring back home. Perhaps someone would like to take this on?

Being a skilled bricklayer, brick maker and builder, he was able to get work relatively easily and several of the early letters concentrated on job opportunities and wage rates in Auckland compared with Coventry. In one letter he noted “Brickmakers are very much wanted”. 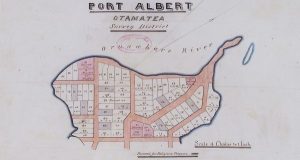 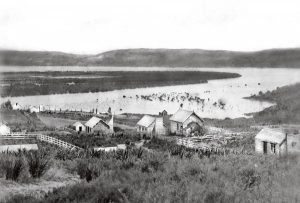 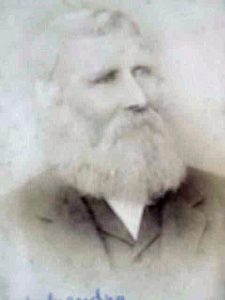 There is much to learn about his experiences of Joseph Wilkins but he settled happily in New Zealand and died on 10th September 1906, aged 83 at Kumeu, Auckland.

Meanwhile, back in Coventry his younger brother Benjamin was hard at work in the brickmaking trade, and in 1878 his daughter Lucy Ann decided to marry Henry Webster. The Wilkins-Webster connection was made, but this is a story for Part 2.