This paper is a brief history of the Prone Pilot Meteor designed and built by Sir WG Armstrong Whitworth Aircraft Limited, Coventry.

Towards the end of the Second World War numerous advanced aircraft designs, the majority of them jet propelled, were prepared by the German aviation industry. One particular proposal, named the Gotha P60 Series, was for a jet powered heavy fighter with its two crew members accommodated in the prone position. This project never reached fruition. Another prone pilot design, the Henschel Hs 132 interceptor, did however reach an advanced stage of development with one of the three prototypes almost ready to fly when the Soviet Army overran the Henschel factory in1945. With the capture of key German aeronautical personnel, together with technical documentation, many of these radically new concepts became available to the victors.

The Armstrong Whitworth (AWA) Prone Pilot Meteor aircraft emanated from a requirement formulated by the Royal Air Force Institute of Aviation Medicine at the Royal Aircraft Establishment, Farnborough. This requirement was for a research aeroplane specially adapted to gather data on the effects of “g” forces on the prone pilot during high speed manoeuvres. Data was required to assess the Bristol Aeroplane’s Type 185 proposal in 1951 for a delta winged, rocket powered, prone pilot interceptor fighter. It was anticipated that a prone pilot position would confer certain advantages over a normally seated pilot.

In 1952 a contract was placed with AWA for the Prone Pilot Meteor and the project proceeded at a fairly leasurely pace. With a prone pilot configuration many technical problems had to be solved. The aeroplane selected by AWA for the necessary modifications was WK 935, the final Gloster Meteor Mk.8 off the Baginton assembly line. This standard Mk. 8  Meteor was modified by grafting on a completely new front fuselage and cockpit section ahead of the nosewheel bulkhead. This added an 8 foot 1inch (2463mm) extension to the airframe ahead of the bulkhead.

The additional cockpit was furnished with a couch comprising a tubular steel frame upholstered with a foam rubber leather covered pad, which supported the pilot from chin to ankles. The couch was bolted to the cockpit floor. The pilot could precisely adjust the couch and hence his prone position with the aid of a number of electrically operated screw-jacks. Additionally, the pilot was provided with padded arm rests. A duplicate set of flying cotrols was fitted, including a short self-centering control column, offset to starboard, and a rudder bar operated by the ankles via hanging pedals. Engine instruments were as the Mk. 8 Meteor and were linked to the normal cockpit. A full set of duplicate flying instruments was provided in three separate panels; port, starboard and centre, with the gyro compass in the centre, set just below the eye line. Both cockpits were unpressurised.

In an emergency the normal procedures for vacating the aircraft were impossible for the prone pilot and special provisions had to be made for this eventuality. Therefore a section of the fuselage floor, together with the pilot’s couch, was designed to hinge downwards, depositing the prone pilot “feet first” into the airstream beneath the aircraft. The exact sequence of emergency evacuation for the prone pilot was as follows. When a decision to “eject” had been communicated between the two pilots, the first operation for the prone pilot was to pull a lever marked, “Prepare to Escape”. This action caused the rudder pedals to swing backwards, the ventral fuel tank, if fitted, to be jettisoned and the nosewheel if not in the “up” position to be blown into the “up” retracted position by a compressed air bottle. The prone pilot then pulled the “Pull to Escape” lever which collapsed the couch screw-jacks and operated a hydraulic ram forcing the fuselage floor and the lower half of the couch into the airstream. Simultaneously, the prone pilot’s harness would be released and snatched clear by elastic cords, permitting the prone pilot to slide off the couch into the airstream to make a normal parachute descent. The parachute was opened automatically by a barastat. The conventionally seated pilot would use his Martin–Baker MK.1 ejection seat to vacate the aircraft in the normal way. The maximum speed for the exit of the prone pilot was set at 120 mph at a minimum safe escape altitude of 400 feet. The aircraft was not permitted to be flown over the sea as no dinghy was available for the prone pilot.

On the 10th February 1954 the Prone Pilot Meteor made its maiden flight from Baginton with Eric G Franklin, AWA’s Chief Test Pilot, at the controls. As a result of these early flights a number of minor modifications were incorporated into the aircraft. Tests flights then continued from Bitteswell rather than Baginton until 31st August 1954, when the machine was handed over to the Flight Section of the RAF Institute of Aviation Medicine at Farnborough. A major programme of test flying was then carried out by the Institute using four of its own pilots and two from the RAE. Additionally, a number of selected RAF service pilots and pilots from the aircraft industry were invited to fly the machine. Whenever the machine was being flown by the prone pilot, there was always the conventionally seated pilot present, the prone pilot not being allowed to fly the aircraft solo. When the aircraft was being flown solo from the rear cockpit ballast had to be carried in the prone pilot position. In total 99 fights were made with the Prone Pilot Meteor, accumulating 55 hours flying time. The Prone Pilot completed its test flying on 31st July 1955. The aircraft was then cacooned and put into store.

The general consensus of opinion from the pilots who flew the aircraft from the prone position was that it was “unusual” to say the least, although practical if aerodynamic considerations made it necessary to do so. The prone position was found to be comfortable, but lacked that feeling of being “anchored” to the aircraft. Pilots call this flying by the “Seat of the Pants”. A number of pilots expressed concern over the apparent nearness of the ground when landing. Without releasing the safety harness and raising the head,  it was not possible to see the wing tips from the prone position. Comparisons were also made between the prone and normally seated pilots. It was found that initially the prone pilot tended to misjudge speed and react more slowly. However, this difference between the pilots tended to diminish with time and practice.  In mock combats between the Prone Pilot Meteor and a “victim” aircraft, the “victim” was always able to make good its escape. The main problem with the Prone Pilot Meteor was one of visibility, especially downwards, even though a clear view panel was installed in the nose. The Prone Pilot was able to withstand considerably more “g” than the normally seated pilot, attired in his “g” suit.  A “g” suit was essential for the second pilot to prevent him“blacking out” under severe manoeuvres. The prone pilot by virtue of his position was permitted accelerations up to 7 g without the use of a “g”suit.

In the event the whole Prone Pilot project was something of an academic exercise, as the aircraft for which the data was required, the Bristol 185, was in true British fashion cancelled. Nevertheless, a great deal of useful information was obtained, particularly by the Institute of Aviation Medicine. The universal introduction of the pressure “g” suit for the conventionally seated pilot also rather negated the need for the prone position. It has been sixty–five years since these tests were concluded and in that time no serious attempts have been made to reactivate the prone pilot concept. However, that could change! The Prone Pilot Meteor was a brave and largely successful attempt at problem solving and a credit to all those involved; designers, engineers, fitters, mechanics and pilots.

Remarkably, the unique Prone Pilot Meteor, WK 935, still survives and is on display at the RAF Museum, Cosford, Shropshire. 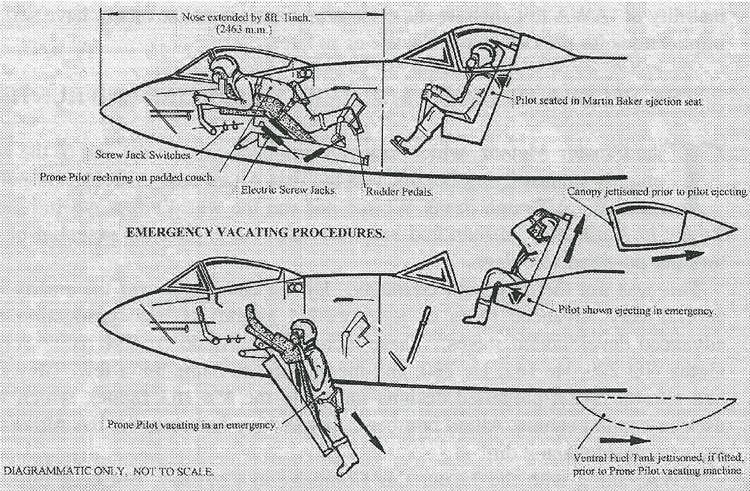