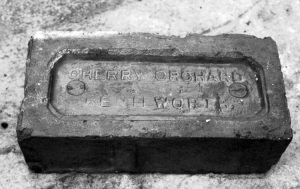 The geology of Kenilworth and its surrounding area has provided a rich source of building materials over the centuries: sandstone (most obviously for the Castle and the Abbey, but also for much more humble construction work), Keuper marl with brick clays, sand and gravel. It is therefore not surprising that a thriving brick industry developed in and around the town, especially in the nineteenth and twentieth centuries and particularly after railway links opened up a wider market. (Excavations undertaken at Cherry Orchard in 1964 and 1965 after surface finds, suggested the existence of a third to fourth century tile kiln in the vicinity.) Some brick-making sites have virtually disappeared from general awareness, including Bulkington brickworks (Oaks Farm), or Ed. Smith’s Steam Brickworks at Crackley in the early twentieth century. However, most people with the slightest interest in this aspect of Kenilworth’s past would correctly associate Cherry Orchard and Whitemoor with large scale brickmaking throughout much of the last century. The success of these two works, in close proximity to each other, was closely related to the coming of the railway, the Leamington-Coventry line of the London & Birmingham Railway, opened in December 1844, and the extension to Berkswell, giving a quicker route to Birmingham, opened in 1884. Cherry Orchard and Whitemoor each had a siding link to the railway (and the location of the Cherry Orchard siding can still be discerned from the Spring Lane railway bridge). Motor transport obviously came to play its part in the distribution of the products of these two works and Cherry Orchard relied solely on it in its later years, hauliers such as Hannam of Kenilworth, Knight of Fenny Compton and Tuffrey of Knightcote appearing in the yard in the 1970s.

The Whitemoor Works was the first of the two to open and the first to close. It was already in existence when W.J. Lockhart came to be associated with it about 1871. He was a man of many parts, coal, stone and lime merchant, agent for Pickfords and the Leamington Priors Bank then railway goods manager and carting agent at Kenilworth. It then became a branch of the Leamington & Lillington Brick Co. for a time, but the landowner, Henry Hawkes, finally decided to operate the brickworks directly. After the Second World War its plant was in need of modernisation and, more significantly, the remaining brick clay reserves were difficult of access, so Whitemoor closed about 1957, leaving Cherry Orchard to represent brickmaking in Kenilworth for another two decades. 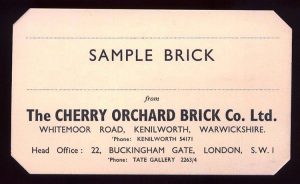 A label showing the company information

Cherry Orchard is first recorded in 1888, located on the site of a former market garden and operated by Messrs. Mason & Dall. By the late 1930s it had been leased by its then owner, Garnett Hartley, to G. F. Smith & Sons Ltd, the Leamington brickmakers. Before the works closed for the duration, an order from E.H. Burgess Ltd pointed the way to its post-war rebirth. Burgess, a construction firm of some significance, with its head office in London and a number of depots to the south and west, acquired the Cherry Orchard site and set about its redevelopment, to a plan drawn up by Hartley and implemented by Stan Alsop, who had a Napton Brickworks background and served as works manager up to the closure of Cherry Orchard. The site was remodelled over three years, 1948-51, its old buildings demolished and old equipment being sold to a Milverton scrap-dealer, who in turn was able to supply some secondhand replacements. A former aircraft hangar allowed for ease of erection and armour plating made a floor strong enough to bear the clay tubs. The new kilns were oil-fired and could be, but were seldom, fuelled by rail-borne supplies (the siding link remained, but was shortened to a stub). Construction was begun by German and Italian prisoners-of-war, replaced by east European voluntary workers; in its closing years the works had a Sikh labour force. As well as common bricks, pre-war production had included pipes, bends and land drains. When production resumed in 1951, engineering bricks featured large, in addition to facing bricks. From time to time orders were received for lorry-loads of unprocessed clay: interviewed in 1980, Edgar Waine, an owner-driver from Solihull, recalled carrying loads of clay from Cherry Orchard to a works at Castle Bromwich. For two decades business flourished, but the national economic crisis of the mid-1970s, with its effect on the building industry, together with the foreseeable end of workable clay reserves, led to the closure of Cherry Orchard in 1977. It is understood that works records were burnt in the last kiln-firing, although a small quantity remained in the office at the entrance to the site, to be salvaged and deposited in the County Record Office in 1980. Equipment was sold off for reuse elsewhere and a small housing development and recycling unit took the place of the brickworks. The Whitemoor Engineering Co. Ltd, steel fabricators and welders, chiefly engaged with stillages, were located for a number of years on the southern edge of the site, which was developed for residential use in 2004. When the site was finally cleared for residential development a wheeled clay-mixer came to light amongst other mechanical relics.

The photographs below were taken by Derek Billings about a month after Cherry Orchard Brickwork’s closed in June 1977, when the site existed in a kind of time warp before clearance began a month later. The claypit was subsequently used for landfill and the perimeter for housing and a light engineering works. 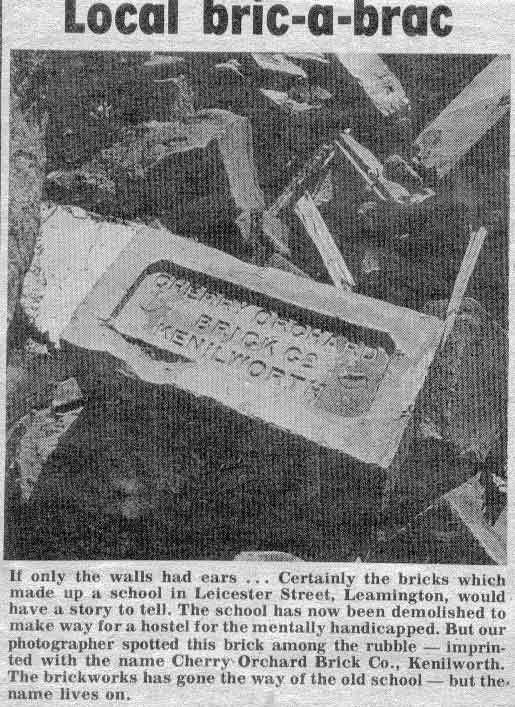 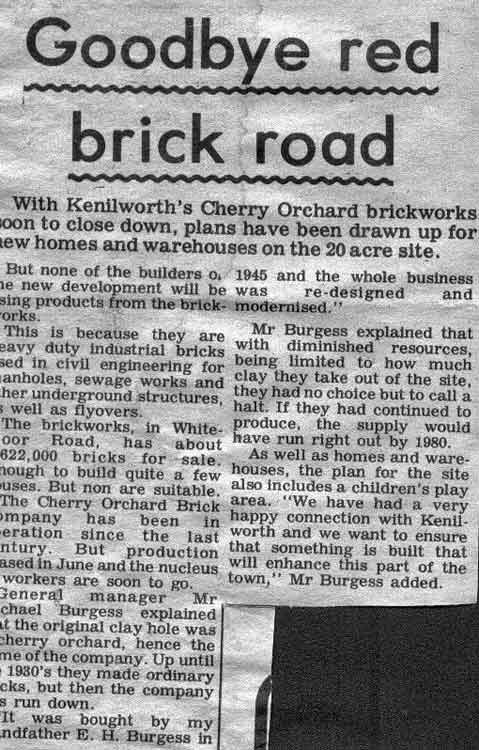 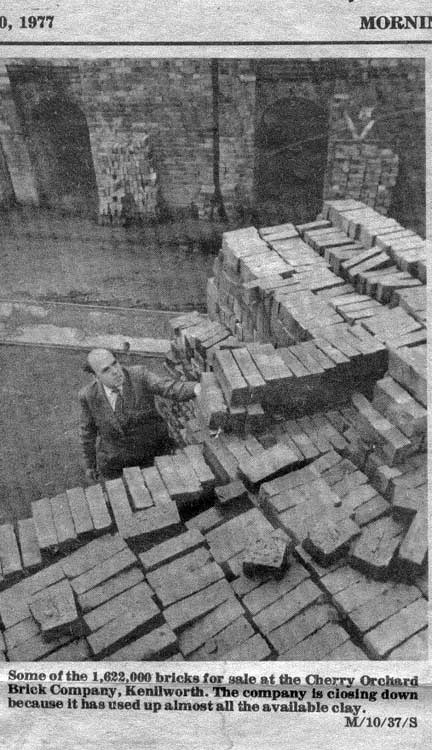 Richard Storey also visited the site in 1977, soon after closure, and took these photos.

The following item appeared on the WIAS website back in 2003!
Richard Storey & Peter Riley visited the site of the former Cherry Orchard Brick Works, Kenilworth on Monday 15th December 2003. The site had been used for some time by a company known as Whitemoor Engineering, making metal fabrications for the likes of the Ford Motor Co. but this has now ceased. Planning consent has been granted on appeal for the construction of flats and the development is likely to commence in January. There is a very little left to see, apart from scrap items, but it is likely that all trace of the site will vanish when the flats are built. Digging the footings may possibly reveal some discarded Cherry Orchard bricks long since buried in the ground.

Below are some photos of odds and ends that were taken on that freezing cold day!

Today there is no trace of the former brickwork’s at Cherry Orchard. The large pit from where the clay was removed was used for landfill during the 1980’s and 90s’ and is now a large grass mound fronted by the well organized Kenilworth Re-cycling Centre. On the right of the site towards Whitemoor Rd is a modern housing development called Harborne Close. The footpath curving away to the right in the photo below does follow the original access off Whitemoor Rd and is the location of the Avery Scales in one of the old photos. The white house with a chimney on the right hand end of the roof can be seen in both photos. The former office has been demolished but the house it was attached to, now a private residence, is the same and is on the right hand corner of the approach from Whitemoor Rd into Pipers Lane. On the left of the site bordering the railway line are modern houses known as Cherry Orchard. 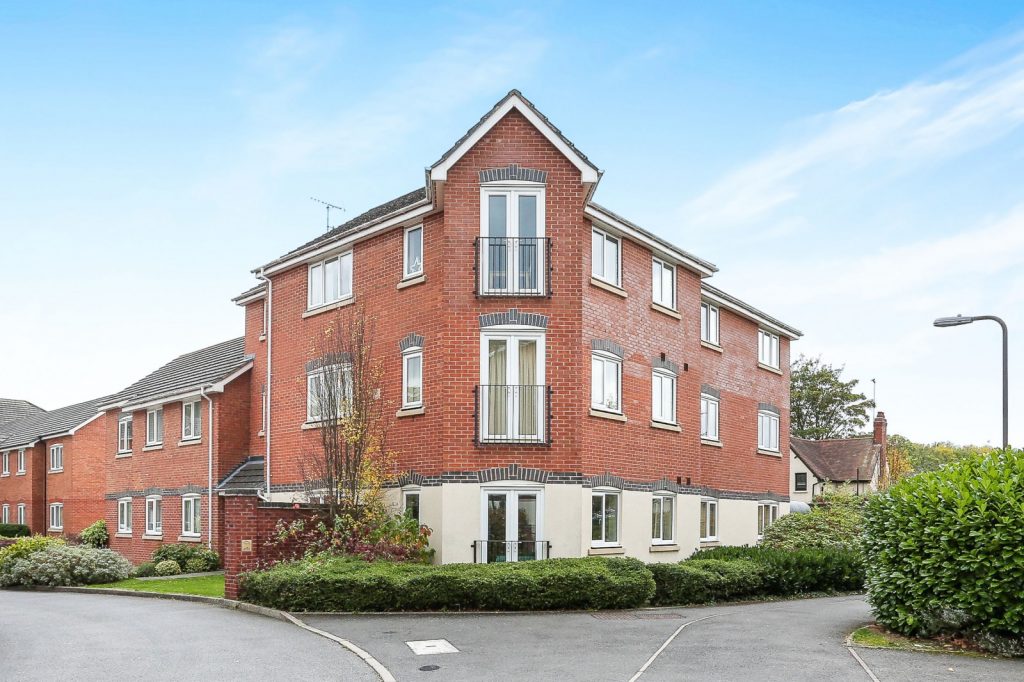