The Kenilworth Horn Comb Industry:
A brief introduction and guide to sources

The production of horn combs in Warwickshire was specific to the town of Kenilworth. Why Kenilworth should become the home to such an industry is hard to explain, except perhaps in terms of the importance of agriculture to the local economy (and thereby to the availability of the raw material) but this is no more than supposition. There were other centres of the industry in the UK, most notably Sheffield, where the link to the cutlery trade via the demand for horn for the handles of knives and forks gives a more direct explanation. Moreover, the dating of the origins of the industry in Kenilworth remains uncertain.

Despite this rather unhelpful pre-amble, there are a number of sources that help to build up a picture of the nature of the industry, the technical details of the production process, and some of the people involved.

Eminent Kenilworth historian John H. Drew completed an article for ‘Transactions of the Birmingham and Warwickshire Archaeological Society, Volume 82, 1965’ entitled ‘The Horn Comb Industry of Kenilworth” and this is the best survey of the industry available. He points to eighteenth century origins, with the greatest activity in the first half of the nineteenth century. The industry was in decline during the 1840s, worsened in later years, with little activity in the trade after the 1860s, and had largely disappeared by the end of the century.

Despite this rapid demise (largely caused by the mechanisation of the processes), it still had an important role to play in the town for a number of years, and made its mark on the life of Kenilworth. Conditions in the industry were harsh, and the Kenilworth comb industry earned the twin ‘accolades’ of being described as “a bit of Brummagem” and “the hell of Warwickshire”! One newspaper reported that “the workmen engaged in the industry did not, as a class, enjoy any great reputation for respectability. They are said to have been a rough set of men, heavy drinkers, quarrelsome, disturbers of the peace generally”. (Coventry Herald October 22nd. 1915)

Descriptions of the production processes give some clue to the qualities necessary to be involved in the industry. It was clearly demanding work, from the arrival of the horn right through to the final polishing. Fortunately, descriptions of these processes are available, particularly via a series of 4 articles in the Coventry Herald in October and November 1915. My thanks go to Richard King for identifying this source, and a copy is attached to this article.

Kenilworth possessed a few examples of workshops where the entire production process would be carried out, but the majority were organised on a domestic basis, with workers concentrating on their particular speciality, and work allocated from masters.

There is very little evidence today of any remnants of the industry in the premises that were known to be the workshop or home of the comb-makers, although some building work has revealed fragments of pieces of comb. Graham Gould’s website explores three sites that housed the industry – 36 Castle Hill (formerly New Row); 58 High Street; Park View, Castle Road. Indeed, many of the houses on the north side of Castle Hill (New Row) were occupied by workers in the comb industry. 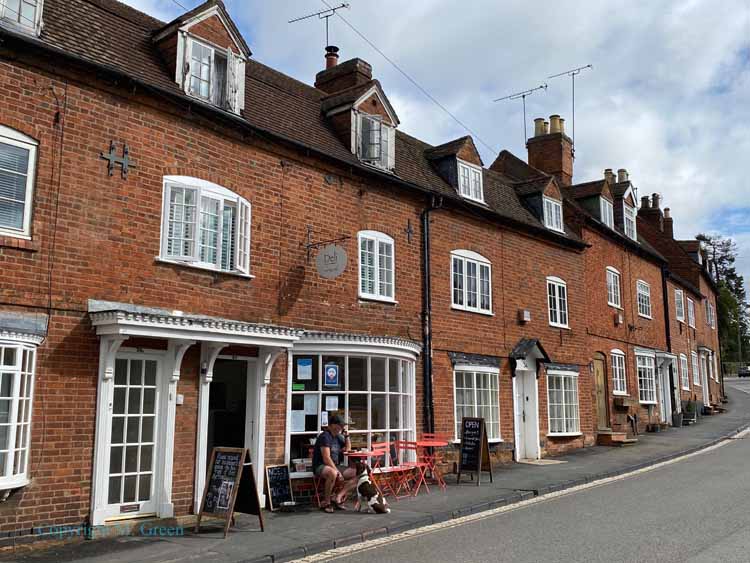 The row of houses on Castle Hill (New Row), with No. 36 in the foreground.

The names of those involved in the industry have been identified via a number of sources, including newspapers, Census Returns, and personal papers such as diaries and wills. Perhaps the most important was the Littleton family, and John Drew’s articles contain much information on them.

Similarly, this extract from Kenilworth History and Archaeology Society for 2000-2001 (provided by George and Joanna Illingworth) gives some background on the families involved.

“During the past year contact has been made with descendants of the Tandys, the Checkleys, the Littletons and the Sturley families, to mention but a few. These particular families were connected with the comb-making industry and were living here in the 18th and 19th centuries. It was very interesting to be able to communicate with their descendants and learn more about the family. For instance, the Littletons had come to Kenilworth in 1727, from Kirby Kendal, Westmoreland, when John Gaunt Littleton, horn comb-makers (born 1707) obtained a Settlement Certificate to settle in Kenilworth. He married a local girl and some years later his sons followed in his footsteps, also becoming combmakers. Francis Littleton went into partnership with his father starting up the business, but it was Joseph, after the deaths of John Gaunt and Francis, who really put Kenilworth on the ‘comb-makers’ map’ and expanded the business.

Records show that the Satterthwaites also came from Kirby Kendal in 1729; they also were comb-makers. The Tandys arrived here around the l780s. James, William, John and George were all comb-makers, with their sons following in their footsteps or becoming tanners, the other main trade of the town. Marriages of the Tandy boys were often into other comb-making families like the Checkleys, Betts and the Bodingtons.

Many of these comb-making families moved away from Kenilworth around 1859. According to William Sutton in his book ‘Multum in Parvo’, the reason was mainly that, although the comb-makers were paid around 30/- to 35/- per week in wages, they were not satisfied and wanted more money. They went on strike to no avail, as the owners simply shut down the factories and moved away.

The Littletons were one of those owners who moved their business, opening up a cutlery making factory in Sheffield. Several of the Tandys went with them, along with others who needed to find work – still using their skills with the horn but, instead of combs, to make the horn handles for cutlery”.

Two footnotes: the destinations for former comb workers of Kenilworth:

With the collapse of the industry, options for former workers were very limited. Many of them turned to Kenilworth’s expanding fruit and vegetable industry to find employment. One such convert was Mr. Henry James and the announcement of his death in the Coventry Herald of 12th. September 1902 made reference to his earlier career as comb manufacturer prior to his conversion to the challenge of strawberry cultivation.

“He was formerly connected with the old industry of comb-making, which used to be carried on here to a considerable extent. He was in the forefront of the trade when it was prosperous. In the flourishing days of long ago, Mr James employed between ten and twenty hands and did a splendid trade, supplying much material to Mr. Henry Heynes of High-street Birmingham, brother to the late Mr. Luke Heynes, of Kenilworth. The articles embraced the finest work.”

The collapse of the industry forced him to look elsewhere and Henry James decided upon strawberry growing as his new venture. He seemed to have been one of the first to challenge the apparent monopoly enjoyed by Mr. Richard Whateley, and an article in the Coventry Herald of July 20th. 1888 entitled ‘Kenilworth Strawberries and Strawberry Growers’ plotted the development of the industry. He was certainly a man committed to the task, and put down his success – described by the paper as “almost phenomenal” – to a capacity for “unsparing exertion, for labours at harvest times from four or five in the morning till eight or nine o’clock in the evening”.

There are also examples of Kenilworth men moving to Sheffield to take up the comb manufacturing trade anew, in a recognised centre for the industry. George Tandy was one such migrant, moving to Sheffield by 1851, and established a business in the city in 1854. The firm in later years operated from premises called ‘The Kenilworth Comb Works’ in New Thomas Street – later called Denby Street – Sheffield. The adoption of the Kenilworth name was possibly because it still meant something in the comb trade, or perhaps it was simply a nostalgic reference to his home town? He and those who followed him (including sons Walter and George A.) – embraced the mechanisation of the industry, a feature not evident back in Kenilworth. The Tandy business certainly grew and by the 1871 census George Tandy was listed as Comb Manufacturer, employing 30 men, 4 boys, 3 women and 1 girl. In adverts of the 1880s reference was made to a London Warehouse and the fact that production was both for the home and the export trade.

An advert from Kelly’s 1884 Directory

The sales particulars for the Kenilworth Comb Works works in 1916
indicated that it was a business of some size.

Combined with this business success came involvement in the local community and George’s son, George A., was elected (as a Conservative) to the Sheffield City Council in 1902 as member for Sharrow Ward.

The investigations carried out for this article revealed that the Kenilworth Works in Denby Street, Sheffield had been listed Grade II. The Designation read:

Kenilworth Works is a late C19 specialist works manufacturing horn, tortoiseshell and German silver combs. It forms a good example of a small works known to have housed one of the subsidiary trades which grew from local expertise of working in certain materials used in Sheffield’s cutlery industry, an industry recognised as being of international significance. 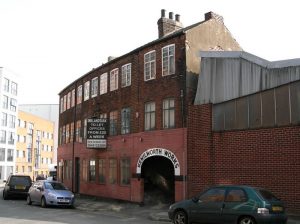 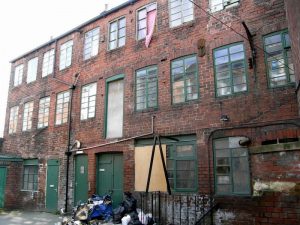 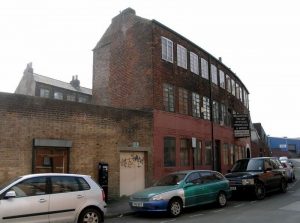