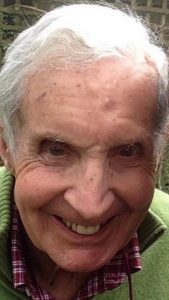 It is with great regret that we have to announce the death of Mark Barnard. He was a regular visitor to WIAS meetings over many years, after an outstanding career in the motor industry. Mark was a delightful man, with a wonderful sense of humour, and he will be sorely missed.

The Rover Motor Company’s work on Whittle’s jet engines during WWII gave the Wilkes brothers, owners of the company, the idea that this new power unit could be adapted for automotive use.  Mark’s work at the Rover company, after the war, led him to develop an interest in fuel systems for the new units: from Spen King’s T1 (‘JET 1’), the world’s first gas turbine driven car in 1952, through the following marques (T2, 3 & 4) in the 1960s, culminating in the Rover-BRM racing cars which ran in two successive years at the Le Mans 24 hr race.  Later, more successful applications for Rover’s small gas turbines followed: aircraft auxiliary power units (notably installed in the Vulcan bomber and Avro 748).  Mark’s book ‘Pistons to Blades’ – Small gas turbine developments by the Rover Company, provides compelling reading for anyone wishing to research the subject. He also gave a fascinating presentation, full of infectious enthusiasm, to the Warwickshire Industrial Archaeology Society.

The consolidation of the UK’s motor industry, in the late 1960s, brought promotion for Mark in the form of management appointments at British Leyland’s Atmospheric Control Research Laboratory.  Mark’s fascination with classic high-performance cars led him to acquire an Austin Healey 3000, in which he had a near fatal accident. He also suffered a severe brain haemorrhage in 1987, and it was revealed in the Funeral Service that it was our own Peter Stanworth whose skills as a neuro-surgeon saved his life. Peter and Mark became friends, and Mark, using his engineering skills, thought he might be able to improve some of the equipment that Peter used! On a re-union event for the 1965 Monte Carlo Rover-BRM car with Sir Jackie Stewart, he was not afraid to put the driver right about certain technical details. Indeed, he was unable to leave any car he encountered as it was – he would always alter the specification in some way, usually with the goal of greater power and enhanced speed. Nor was he afraid to cross boundaries – Mark, as Leyland’s man, was part of the team involved in adapting and testing the Leyland 2S/350 turbine for rail use on the APT (Advanced Passenger Train). 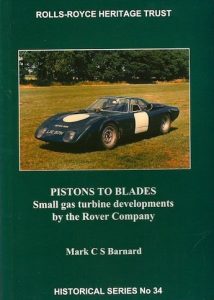 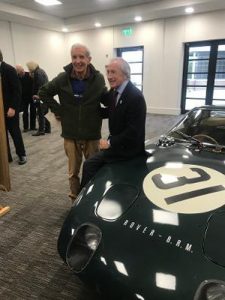 Some anecdotes to finish, which help to give some indication of the character of the man. He loved telling the story of how when he and his colleagues drove the prototype turbo car people on the pavement would look up in the air, instead of at them, because it sounded like an aeroplane. In retirement he opted for a milder form of classic car: a Citroen 2CV in which, for a number of years, he entered the Chipping Sodbury Round Table Classic Car Rally – family members and friends acting as navigators. Mark always liked to go out with his chainsaw to obtain their firewood, and did so as recently as a few months ago. After a storm we would sometimes see him cutting up fallen tree limbs, and Diana with him to make sure he didn’t take anything too resinous – they once had a chimney fire – or come to any harm. A lovely man who got the very best out of life.

At his Funeral Service held on Monday 7th. September 2020, much emphasis was placed on the significance of the Christian faith in Mark’s life, the importance he placed on family, and, of course, that in the end, he thrived in being an inquisitive, ingenuous, slightly eccentric, car fanatic.